Last month Robin Hutcheson was confirmed as the seventh administrator of the Federal Motor Carrier Safety Administration, but she has been leading the agency since January after acting administrator Meera Joshi left to become a deputy mayor of New York City.

It has been a busy year for Hutcheson since then. Barely a week after she took the wheel at FMCSA, the U.S. Department of Transportation rolled out its National Roadway Safety Strategy, an agency-wide initiative aimed at tackling road fatalities. FMCSA has also issued a significant number of rulemakings, and information and exemption requests as the trucking industry transitions to a post-COVID-19 economy.

This week Hutcheson spoke with FreightWaves about her priorities and other issues the agency faces as she closes in on a year as head of FMCSA.

This question-and-answer interview was edited for clarity and length.

FREIGHTWAVES: What are your top three priorities at the FMCSA now that you’ve been confirmed?

HUTCHESON: “We have many priorities, obviously, but here are three.

First, the National Roadway Safety Strategy. This is a priority for the department. It’s a priority for the Secretary of Transportation, and it’s a priority for me and FMCSA. There were over 5,000 crashes involving a commercial motor vehicle [in 2021] and over 42,000 [overall]. It is a crisis. But safety is our mission, and we’ve committed to zero fatalities as our goal. The National Roadway Safety Strategy made a list of actions that we’re going to take as an agency, and DOT just released a dashboard to be used as an agency progress report.

This is also a call to action — we can’t solve this problem by ourselves. We’re thankful for all the efforts that happen in so many spaces, from industry, from advocacy, from the federal government and from local government.

Second, driver retention. When I began this as deputy administrator, I became almost obsessed with what I was seeing when I drove around. I spend some time in the West, some time in the East — there are so many trucks and truckers on the road. When you start really paying attention, you see the person that’s sitting behind the wheel, carrying whatever they’re carrying to someplace important. Of those 5,000 commercial motor vehicle crashes I mentioned, 800 drivers were killed in those crashes. The driver really matters, and the job really matters. So we have to focus on drivers as a priority.

We’re doing a lot of listening to the industry. A driver that is compelled to stay in the industry becomes the safest driver on the road. We have data that says the longer a driver drives, the safer they become. It’s also great for our supply chain and great for industry to keep drivers driving because they want to. So kind of a dual win there.

Third, technology. We are taking a very future-focused approach in our agency in leveraging that technology. We tend to think of people wanting to go straight to a certain outcome with technology, but there are so many interim steps that will make us better, improve safety, improve the supply chain. Simple things like speeding up inspection times by using better technological tools, which we’re working on with a beta test that’s out there now. And [FMCSA is considering] Automatic Emergency Braking [AEB], which is technology that can be harnessed to help a driver and also improve safety.”

FREIGHTWAVES: Speaking of safety, can you update us on the status of the large truck crash study?

HUTCHESON: “Inherent in my three priorities is implementing the Bipartisan Infrastructure Law. It’s easy to focus on the increased money for grants and other programs provided in the law, but we are also really benefiting from the law’s research agenda, [such as] the Large Truck Crash Causal Factor Study.

The last study is decades old, and our best safety intervention will come from a better understanding [of crashes] and better data. We are very much a data-driven organization, and we need better data to be able to really tailor interventions.

The study has a long lead time because that’s what good data requires. We will be giving updates along the way, but it is a couple-of-year process to make sure it’s defensible.”

FREIGHTWAVES: Could you explain how FMCSA determines when to issue a formal notice and comment for exemption requests, given the recent wave of such requests from hours-of-service rules from individual drivers and carriers?

HUTCHESON: “The agency is required by statute to request public comment on each exemption application we receive. And to date, during my time here, I haven’t had the situation where we’ve said, ‘No, we’re not going to do that.’”

FREIGHTWAVES: These exemption requests generate huge numbers of comments, as you know, many from owner-operators asking your agency to consider altering hours of service and ELD [Electronic Logging Device] rules. Do you see the agency taking another look at these rules?

HUTCHESON: “FMCSA went through a process not too long ago on hours of service and made revisions, so it’s not something we’re looking at opening back up, and the same with ELDs. We’re open and transparent in discussing questions and issues that arise on both of those topics but we’re not actively pursuing changes.”

FREIGHTWAVES: How concerned are you that full automation could lead to driver job losses?

HUTCHESON: “Regarding automation, a colleague made this analogy: Automation is the penthouse, and sometimes we forget that on the elevator on the way up there are many stops along the way — like AEB, for example.

There’s no doubt there is concern out there. And humans doing work is always going to be something important to us, and we see them as part of this picture. I will also say, anecdotally, in the testing that’s occurring now, there are humans running the tests and there are people in the truck. And in the testing now it’s only during part of the trip where the truck is running autonomously, not the whole trip — which really speaks to the idea that people will be needed.

What I’m most interested in are the wraparound systems. When I think about some of the premises of the National Roadway Safety Strategy and the safe-system approach, humans are fallible. We’re born that way. We make mistakes. There’s no engineering the mistakes that humans can make. We can’t engineer that out. So I think the way to think about this autonomous technology [is] what is the wraparound system to this human condition of error that can help reduce those errors and improve safety at every turn?

We also recognize there are potential significant safety benefits with automated driving systems, and our role is to ensure that safety remains at the forefront as the technology develops.”

FREIGHTWAVES: What will be FMCSA’s role in the push to electrify trucking?

HUTCHESON: “Electrification is something that’s widely discussed in this administration. It’s something that [National Highway Traffic Safety Administration] is working on, making sure every state has charging [facilities]. As to how that applies to trucks, we are engaged in that conversation with our partners … and we’re looking ahead to our core role in this, which is understanding what the possibilities are but also how electrification would change or modify the way we inspect a vehicle, for example. We’re asking ourselves generally how would our work change in any way if we saw more adoption of electric trucks on the roadway, and we’re keeping on top of the early adoption that we’re seeing.”

FREIGHTWAVES: What is the status of the May 2020 petition filed by the Owner-Operator Independent Drivers Association seeking more transparency on broker transaction records?

HUTCHSON: “We are in receipt of OOIDA’s letter asking for an update on that petition. The team has it before them.”

FREIGHTWAVES: Do you support the Guaranteeing Overtime for Truckers Act, which would require carriers to provide overtime pay for their drivers?

HUTCHESON: “I’m not able to comment on active legislation.”

FREIGHTWAVES: Regarding the Safe Driver Apprenticeship Pilot Program, what is the status of application submissions? How many has FMCSA received so far?

HUTCHESON: “This is another Bipartisan Infrastructure Law highlight. We opened the opportunity this summer and have had a round of applicants clear our process, and we have another round in the queue. We have them coming through in batches. So I’m hopeful that this will be a very successful program where we’re able to both open the opportunity, build the safety components around it and also evaluate its effectiveness through a really good data collection. We will be reporting on that publicly in the coming months.”

HUTCHESON: “It is very much a supply chain indicator tool, so we’re in a support and not a lead role, but we think it’s a great opportunity to use data and see what’s coming around the bend in the supply chain. Connecting the trucking components of FLOW to the folks in [DOT’s] Office of the Secretary who are building out this tool — that’s our primary role, and also to make sure we’re as supportive as can be on the sharing of that data. We’re very encouraged because it brings in all the modes that make up the multiple spines in the supply chain.” 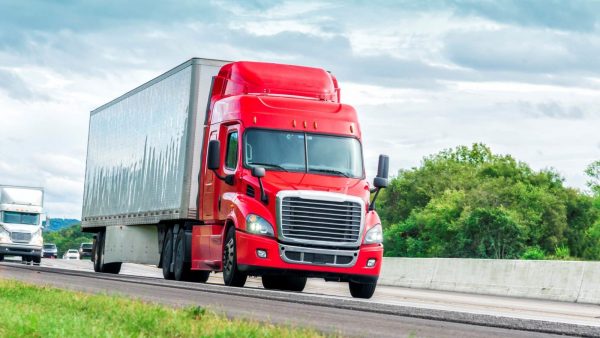 TAKING CONTROL OF YOUR PERSONAL HEALTH